The History Of Skirting Boards

Where did it come from? Why was it made and how is it still a relevant piece of the house many years later? In todays blog we will be talking about the history of the skirting board and why it’s still important today. 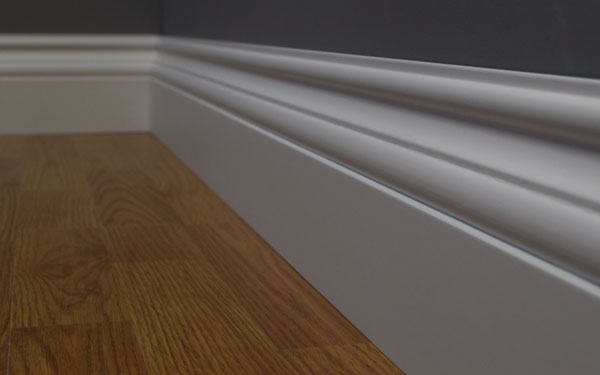 The term skirting boards was first mentioned in the Victorian era where rich individuals were trying to keep up the grand designs of their houses.

At that time walls were made from bricks and heat used to be a huge problem. Many people couldn’t afford a radiator to keep warm.

Plaster finishes at the bottom of walls also varied in quality too. Many were poorly painted and meant that a lot of houses needed this covered up.

Back then, the skirting board was seen to do two jobs. The first job was covering up the poor finishes of plaster and keeping the house warm.

The second job, for those who could afford it, was to give the house a grander look. They achieved this by making the skirting boards huge, usually 30cm plus in height.

Luxury houses back then had high ceiling's and the size of the skirting boards only made this more obvious to those who would be inside the home.

The idea that skirting boards could be used to make homes look good was in mind for the Victorians and we can see this continue in to the modern era.

It was only during the 20th century that now, not only were people getting a chance to have skirting boards, houses became smaller too. This meant needing big wooden skirting was no longer needed.

Smaller skirting took its place instead and rather than wood, MDF and simpler designs for the most part replaced wood as the material of choice due to cheaper costs and longer shelf life.

A lot has changed about how skirting boards are used today. In the Victorian era, not only did skirting boards come to light, other items used included dado rails and picture rails.

Picture rails were used to hang picture frames and make them appear to float in the air, a real luxury at the time.

Dado rails were used to prevent the backs of hairs causing damage to the walls.

Of all the items to remain relevant, only the skirting board has maintained general success as many people still use them today. But why is this?

For one, skirting boards have changed with the times. Although its main use is still relevant, it's now seen as fashionable to have nice looking skirting boards.

In the UK, there’s so many new profile designs - anyone can now make their homes really stand out.

There’s also many different heights and thickness options, which would not have been available to the public during the Victorian times. This has opened the idea that skirting boards are essential, not just for wall protection and warmth but for style and making the house come to life.

Although house designs are changing and homes are once again looking to be more streamlined, skirting boards haven’t diminished in sales or popularity.

These once simple items are now changing with the times and due to this, skirting boards have remained relevant throughout the years.

If skirting boards were still made of wood it may have been in trouble. However, thanks to the invention of man made MDF, skirting boards can be made forever and they can last a lifetime too (unlike the wooden counterparts of yesteryear).

Skirting boards are here to stay. It's safe to say that the Victorians were somewhat ahead of their time as the ideas present in those days regarding the uses of skirting boards have carried on and expanded as time has moved on.

Hopefully you’ve enjoyed reading this blog. If you want to see more click here or if you want to see our new videos, please check visit our YouTube channel. Otherwise we will see you next time.